To address uncertainties surrounding the impacts of unprecedented 2019-20 bushfires in southeastern Australia, we convened a symposium on field-measured impacts on biodiversity for the 2020 Ecological Society of Australia conference. Nine presentations covered a range of studies on plant species and communities, reptiles and mammals. Here we summarise the presentations and review other field studies from NSW, some of which are currently unpublished. The impacts were extensive, but results also estimated survival rate perhaps higher than first reported in the media. More than half of individual mammal, reptile and threatened rainforest trees may have survived the fire, though small populations remain very vulnerable to second fire in the near future. Comprehensive understanding of the impacts of these fires requires much more field study, and for the results to be interpreted in the context of the broader fire regime. The symposium was an important early step in that understanding. 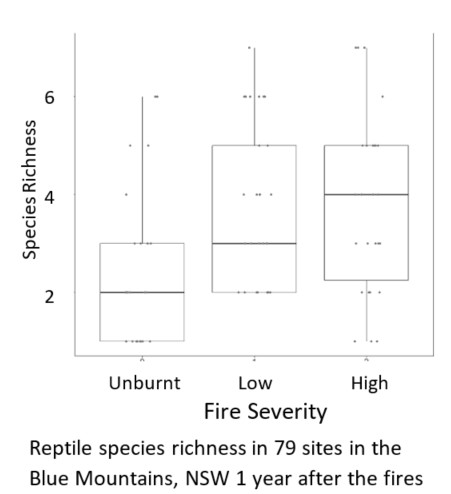 The full paper can be found as early view at the Austral Ecology website here.
Read the full text
Air Quality, Prescribed Burning

Prediction of air quality in Sydney, Australia as a function of forest fire load and weather using Bayesian statistics

The Role of Construction Standards on Building Impact of the 2013 Linksview Wildfire, Australia

Price, O, Roberts, BR (2022) The Role of Construction Standards on Building Impact of the 2013 Linksview Wildfire, Australia. Fire Safety Journal 28, 103545.   Summary The 2013 Linksview fire destroyed 195 houses in the Blue Mountains of NSW in 2013. In this study, we examined the role of construction codes on the impact of houses exposed to the fire, by extracting details of construction year and standard for 466 houses from the archives of the Blue Mountains City Council. Houses built to standards imposed from 2000 fared better than previous standards, though post-2000 houses assessed at Flame Zone level were vulnerable. Construction year was also a good predictor of impact with pre-1990 houses suffering more than twice the level of impact as post-2000 houses. Older houses tended to have more vegetation within 10 m of the house, and this probably partly explains why they are more vulnerable. Year of modification (i.e. additions to a house) was a worse predictor than year of construction suggesting that imposing strict standards on modifications does not change the vulnerability of the whole house. We briefly discuss four policy implications of the study: Construction standards are clearly useful; Houses in the Flame Zone are vulnerable; Lack of maintenance is a problem; and Construction Standards for building modifications do not improve the resilience of the house.

Price, O, Nolan, RH, Samson, SA (2022) Fuel Consumption rates in eucalypt forest during hazard reduction burns, cultural burns and wildfires Forest Ecology and Management 505, 119894.     Abstract.  Accurate estimation of emissions from biomass burning and their impact on carbon storage requires pre and post-fire plot measurement of fuel consumption across a range of forest types and fire severities, and this information is currently far from comprehensive in Australia or elsewhere. We measured fine and coarse fuels in 44 sites before and after 20 fires including cultural burns, hazard reduction burns and wildfires in resprouting dry sclerophyll (eucalypt) forests in the Sydney region of Australia. We compared consumption among the classes of fire severity and fire types. Most of the fires removed the great majority of fine litter and near surface fuels (mean 68% and 94% respectively) but a smaller and more variable percentage of other fine components and coarse fuels. Consumption was largely a function of pre-fire fuel levels. However, percentage consumption varied according to fire severity. Remaining fuel was negatively, and fresh fuel (i.e. immediate post-fire inputs) positively related to fire severity so that the two were in balance for litter, twigs and coarse woody debris. A higher proportion of twigs and coarse woody debris were consumed in hazard reduction and wildfires than in cultural burns, and more canopy and tree wood was consumed in wildfire than the other fire types. Total fuel consumption was 12.8 t ha-1 (13% of pre-fire) in cultural burns, 75.7 t ha-1 (27%) in hazard reductions, and 123.5 t ha-1 (38%) in wildfires. This was dominated by tree biomass consumption (69% of total). Our estimates for hazard reduction burns are higher than most previous studies from Australian forests, probably because our fires spanned a greater range of severities. Our study provides a benchmark for estimating fire emissions and carbon dynamics for the region and will contribute to improving predictions of the impact of hazard reduction burns on fire behaviour and smoke emissions.

Price, OF, Forehead, H (2021) Smoke patterns around prescribed fires in Australian eucalypt forests, as measured by low-cost particulate monitors. Atmosphere 12, 1389.   Abstract: Prescribed burns produce smoke pollution, but little is known about the spatial and temporal pattern because smoke plumes are usually small and poorly captured by State air-quality networks. Here, we sampled smoke around 18 forested prescribed burns in the Sydney region of eastern Australia using up to 11 Nova SDS011 particulate sensors and developed a Generalised Linear Mixed Model to predict hourly PM2.5 concentrations as a function of distance, fire size and weather conditions. During the day of the burn, PM2.5 tended to show hourly exceedances (indicating poor air quality) up to ~2 km from the fire but only in the downwind direction. In the evening, this zone expanded to up to 5 km and included upwind areas. PM2.5 concentrations were higher in still, cool weather and with an unstable atmosphere. PM2.5 concentrations were also higher in larger fires. The statistical model confirmed these results, identifying the effects of distance, period of the day, wind angle, fire size, temperature and C-Haines (atmospheric instability). The model correctly identified 78% of hourly exceedance and 72% of non-exceedance values in retained test data. Applying the statistical model predicts that prescribed burns of 1000 ha can be expected to cause air quality exceedances over an area of ~3500 ha. Cool weather that reduces the risk of fire escape, has the highest potential for polluting nearby communities, and fires that burn into the night are particularly bad.

Some Challenges for Forest Fire Risk Predictions in the 21st Century.

The severity and extent of the 2019-20 Eucalyptus forest fires are not the legacy of forest management.